HomeFuture techAfter the release of Niantic’s Lightship - What does the future hold...
Future tech 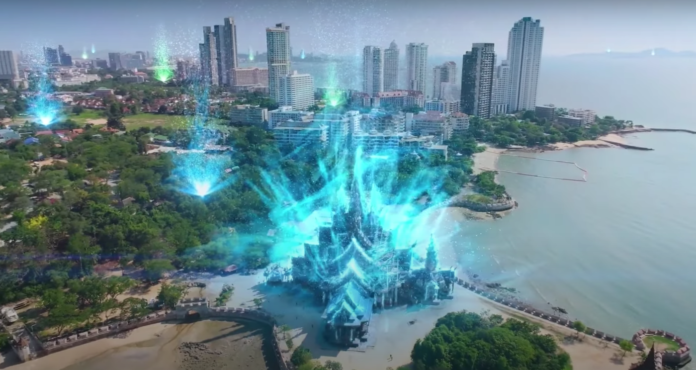 The release of Niantic’s Lightship Augmented Reality Developer Kit (ARDK) opened up the technology that powers the most popular location-based AR game of all time: Pokémon GO. Now, every studio that wants to build an AR experience could quite easily do so with the advanced tools at hand. But will they? What does the future hold for AR? We asked a couple of (AR) studios what they think.

Rafael Barbosa, CEO of Yellow Panda Games thinks the release of Lightship is a great incentive for more developers to join the XR industry. “It’s quite difficult and risky to develop AR and VR games and applications due to lack of technology. Things usually have to be made from the ground up, which is time and money consuming. There are some AR kits available already of course. However, Niantic seems to excel at multiplayer and location-based experiences, which is a great advantage.”

Barbosa believes that the release is a step forward to make AR more mainstream but that it’s not going to single handedly move the market forward. There needs to be serious investment in the AR space. “Why develop AR and VR games when it means being alone in a high risk market? VR is leaving this behind as Meta is investing billions into creating a market for the Quest platform. However, we have not seen the same type of investment into phone-based AR games. Companies need to invest so smaller developers can take initiative. Otherwise it will be difficult to choose to work with this market as there are better, more financially stable markets available to them.”

“We will definitely use the Lightship ARDK for a couple of projects next year”, says Kathrine Stone, Lead Developer at Danish studio Articipate. “We develop outdoor AR experiences for museums so especially the Real-time mapping tools are interesting to us, to create more realistic AR interactions. We are also planning multiplayer games in the coming year, so we will look into the multiplayer tools of the ARDK.”

Will the release of ARDK open up the market for AR games? “I hope so. Lightship will give developers the tools needed to more easily overcome some of the issues in AR development, like realistic occlusion, mesh mapping, multiplayer etcetera. This will hopefully shorten the development process and make it easier to create realistic AR experiences”, says Stone. “I think we can look forward to a future where the real-world metaverse is a reality. It will still require that we keep pushing the limits for AR and that the AR community will continue to grow.”

Niantic CEO John Hanke firmly believes in what he calls ‘the real-world Metaverse’ where the real world and virtual objects and characters interact in a natural way. Mike Wozniewski, President and CTO of Hololabs thinks it might be quite a while before that is possible. “The real world is far too complex and unpredictable to get past the uncanny valley. AR content will continue to look ‘tacked on’ and float in front of the real world rather than blending in and altogether disappearing into one single reality. Complex lighting, dynamic objects, reflections, shadows, extra bright or dark conditions and so on just make this problem way too hard to solve right now.”

His studio Hololabs in Victoria, Canada is currently working on a location-based AR game called Merge Haven where players need to breed and cultivate alien air creatures. “It seems that some of the cool location features you find in Pokemon GO are not available yet in Lightship”, says Wozniewski. “However, the extra data and context of the real world, like location information, regions, points of interest and so on can offer a very interesting playing field for games. We would love to see how Lightship can help on projects such as these.”

Rafael Barbosa of Brazil-based Yellow Panda Games sees another hurdle for mass adoption of a real-world metaverse: “Actual AR Glasses could be a big step forward. That is, if we do get good looking, portable and battery durable devices. Bulky devices such as the Magic Leap or NReal Light are far from becoming mainstream because of the bulkiness. I’m sure they are aware of it and I’m sure that this is not an easy thing to fix. However, when it is finally fixed, it is sure to become big.”

Clash of the Metaverse Titans: Microsoft, Meta and Apple