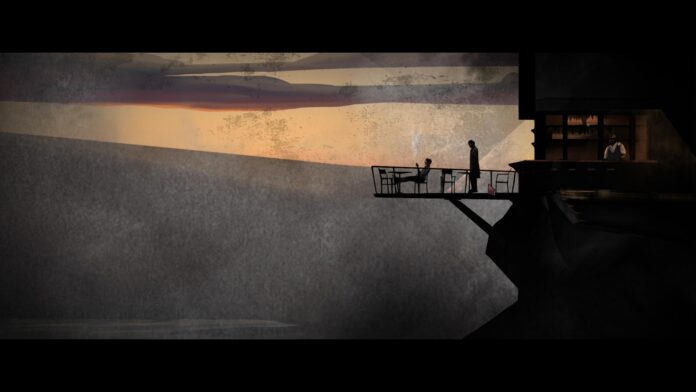 It took him about 3 years to turn the idea in his head into a game. GRUNND is the debut game of Olafs Osh, founder of Sektahouse, a one-man studio based in Riga, Latvia. He formed a team of freelance developers, artists and a composer that are scattered around the world. Although working together with people in different time zones may be a bit ‘chaotic’, he managed to make the game exactly how he pictured it in his mind.

GRUNND tells the story of a man that oversleeps in a train and ends up in Bytown, a seemingly ordinary town just before sundown. When he misses the last train back to civilization, the man soon finds out that the town and its inhabitants are not quite as they seem. Resulting in a somewhat surreal night full of bizarre meetings and events.

“I like dark stuff”, says Olafs Osh. “You can say that GRUNND is inspired by the works of David Lynch and Kafka. Just look at Twin Peaks. The world is cohesive and has logic to it, but connecting the dots is somehow still difficult. And I really love Kafka’s ‘The Trial’. How characters have their own working world within them, despite being completely different. First and foremost it’s Southern Gothic. You can see its influence in the artwork as well.”

The journey to the finished product hasn’t been an easy one. For one Osh had to secure funding while also keeping his team working. “We did a successful Kickstarter campaign in November 2022”, he says. “And thanks to the Bright Gambit Initiative I was able to finish the game. Funding was a much needed lifeline. Another huge thing is their know-how and contacts. They care about you, introduce you to people and share information on how the industry works.”

So, how did Osh find his international crew of collaborators? “Got really, really lucky. I found our graphic designer Nikola over at Reddit. I picked up Laurenco through UpWork. He’s from Brazil and he’s the programmer who is helping me with the Input System (oh, the nightmare). Our composer Ed Watkins found me at the start. The overall tone of the idea really spoke to him. I also have to mention Tomy from Pixel Crushers. He is the beautiful mind behind the Dialogue System Unity asset.”

Osh describes the development process as ‘a bit chaotic’. Being on different continents can do that to a team. “What I have learned, the most important thing is to make as detailed sketches as possible”, he says. “The same goes with music. It doesn’t matter that you feel and sound like a dummy. Just be as precise and clear as you can be and the guys will understand.”

Finishing the game (it launches on Thursday 26 January) feels like an enormous achievement for Osh. “I’m just so proud of finishing the game. It has not been easy, not financially, not mentally. Also, I am very proud of my team and people who helped me out through the development process. People are amazing.”

And finally, what does GRUNND actually mean? Osh grins and says: “I’m not telling you!”