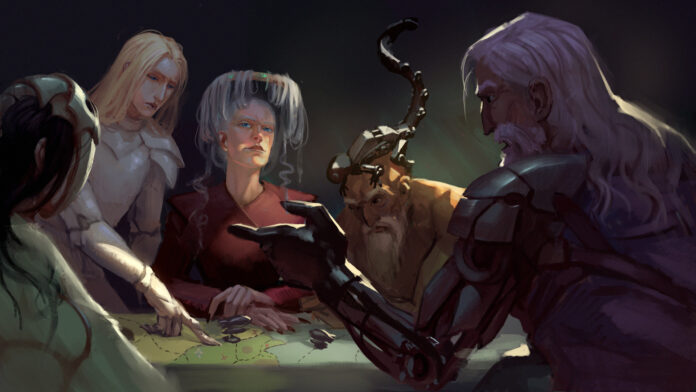 The path to a successful career as a solo developer is hardly ever a straight line. David Stark used to work as a programmer on all sorts of software development projects before he took the leap of faith and pursued his true passion, game development. It was at ‘a frankly angry point’ in his life. When a contract job refused to pay him for his work he had ‘a giant hole in his wallet and a visceral desire to see large explosions’. So he started working on Airships: Conquer the Skies.

In the game players construct steampunk airships and send them into battle while tiny air sailors run around, manning the ships. He released a first, very early version of the game in 2014. Now almost 9 years later, the game is still going strong on Steam. Stark is still adding to the game to keep the community interested. “The game is successful enough for me to support myself. I can live comfortably, just not extravagantly”, he says. Meanwhile a new game idea is brewing. “It will also be about horrible things happening to small simulated people.”

“I did game development as a hobby as a teenager, so this was something I’d always been interested in. After graduating from university, I worked at two programming jobs, which were both… OK, but not very satisfying. I kept on doing game projects on the side. Eventually I had a game that I felt was far enough along that I could maybe finish it and sell it, so I quit my job. Shortly thereafter I contracted a major case of chronic RSI that made me mostly unable to work for about two years. Oops.”

“So once I was a bit better, I supported myself through software development contract work and kept plugging away at my game when I could. Then at some point, after a particularly frustrating contract refused to pay me, I decided to put together a quick prototype of an airship combat game, because I wanted something more viscerally satisfying than the space RPG I’d been working on. And this prototype really took off – people showed far more interest in it than they ever had in the RPG. It took a few months for me to admit it to myself, but in the end, I dumped the project I’d been working on for years and started work on the airship game in earnest. A few months later, I released the first version on itch.io, and while it wasn’t an overnight success, it’s been growing steadily ever since. So as you can see it was an extremely straightforward process.” (laughs)

“I don’t have a boss to deal with! I can make my own decisions about what to work on, and when to work on it. The thing with software development is that things are randomly much easier or much harder than you think. So any attempt to tame it into some nice linear process is basically a delusion, and an endless source of conflict between workers and bosses. Working for myself means that I can decide to just not do something if it turns out to be too hard, or to do something that’s hard if I’m really motivated to do it. Of course, in the end, I have to make a game that people want to play – but I’m a lot more agile like this.”

And the biggest pitfalls?

“Well, you have to do everything, even the things you don’t like doing. You have to do tech support, community management, taxes, marketing, and so on. And you have to learn to be at least competent at all of them. Even if you end up hiring someone to take on the work, you still need to understand it well enough to be able to tell if they’re doing a good job.”

“I mostly scribble ideas on printer paper or napkins when they come to me. When I’m working on a particular project or feature, my mind tends to be occupied with it by default. For larger features or projects, I will eventually sit down and make a plan of what I want to implement, to make sure that things make sense and are balanced, but a lot of the creative process just happens while I go about my day. So a lot of game design happens in the shower.”

“It’s something you need to manage, to the degree that you can. I try to find ways to make myself interested in whatever I’m currently working on. Also I try to structure my work so that the interesting bits and the boring bits are interspersed, so I’m not left with long stretches of time where I’m just not motivated. But sometimes, those still occur, and I just have to grit my teeth and work through them. I’ve also learned that your motivation will just naturally ebb and flow, so even if you don’t feel motivated now, don’t beat yourself up. In a week or three, your motivation will probably return.”

“See also the point about bosses. In practice, my work happens partly in bursts of amazing productivity, in solid weeks where I get a nice amount of work done, and in long stretches of time where there’s not that much progress.”

“Let’s be clear here: solo development is a bit of a relative term anyway. Yes, I do nearly all the work on the game myself, but I do contract out for some artwork and music. But I have no interest in building a studio, hiring employees, and all that. It’s stressful enough being responsible for my own livelihood, and I would not want to be responsible for an entire team. But I could imagine collaborating with others, or joining a studio for a project.”

Airships: Conquer the Skies is out since 2018 (and earlier in Early Acces), are you still working on the game?

“In August 2022, I released a big update that added diplomacy and more complex main map gameplay, and I now consider the game to be reasonably complete, in a state where I could walk away from it and be satisfied. I’m continuing to support it with bug fix and balance patches, though those are becoming less frequent. I am also working on a DLC for the game, which I aim to announce in a few weeks.”

“The game is successful enough for me to support myself. Because I live in an expensive city (Zurich) in an expensive country (Switzerland) there’s less money in my bank account than I’d like. But I can live comfortably, just not extravagantly. The trick is to be so busy with game development as a job-cum-hobby that you don’t have time for any more expensive pursuits like travel or fast cars or spending all your savings on ugly monkey pictures.”

Are you already working on a new game?

“I have a detailed prototype of the next game after Airships, which will also be about horrible things happening to small simulated people. Right now, I’m concentrating on the Airships DLC, but the next game is definitely in the pipeline.”

“There’s definitely a number of things that are bad for the mental health of solo developers. Working by yourself means that everything comes down to you, so you’re never really off the clock. I take my laptop with me on holiday, because if there’s some critical problem like a game-breaking bug, broken server or a discord flame war, I have to be able to fix it. And you can’t help but personally identify with your work a huge amount, and so you’re emotionally vulnerable. A single bad review can put you into a spiral of self-doubt.”

“How do I deal with it? One thing is to accept that things aren’t going to be perfect. There are going to be bugs and bad reviews and flame wars. I’m not going to be as productive as I wish I could be. And I also make sure that I have people around me: I have my family, and I also help run a co-working space / incubator for game developers called Swiss Game Hub. So if I need help or motivation, I can go there and talk to other developers and feel less alone in my work.”