HomeFuture techSwordship is an action-roguelike unlike any other: "We call it a dodge...
Future tech 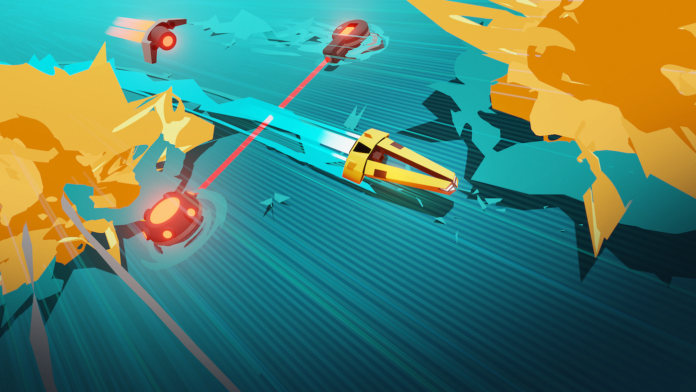 Swordship by Swiss indie game studio Digital Kingdom is a fast-paced Dodge em’ up action-roguelike. The game answers the question what would happen if you remove the shooting from a shoot em’up. It keeps the frantic weaving and diving out of the way of enemy fire, but adds a tactical layer of using the enemy’s weapons against them. “We decided to keep the term Dodge em’ up in the tagline, because it made us laugh!”

Lead designer Benjamin Vurlod was the driving force behind the super-stylized look of the game and much of its game design. The unique premise of creating an arcade shooter without the shooting emerged from the design of the ship. “On one hand I had the idea of lightning fast boats that smugglers use to transfer illegal goods on the water. On the other hand I wanted to create a boat that could also fly and dive. A unique boat, super maneuverable but fragile. The real strength of the Swordship is its ability to dodge at high speed.”

That was the starting point for the rest of the lore and the world. The game takes place in a world after global warming. Humanity has taken refuge in three gigantic underwater cities at the bottom of the ocean. Some outsiders are trying to steal the containers that are transported between the cities in order to get vital supplies to the less fortunate people that were banished. The only way to do this is with fast ships. “The idea is that the Swordship is light and maneuverable so guns would only slow it down.”

Thanks to Mad Max

It took a while before the team found the right way to incorporate the fast paced dodging into satisfying gameplay. “We started with the camera from the back of the swordship in a kind of open world. But it presented us with a lot of problems”, says Vurlod. “It felt a bit like a car chase where players had to watch the road and at the same time actively concentrate on dodging movements and quick analysis of enemy patterns.”

They dropped the open world and placed the action in a corridor to simplify the driving, but still it didn’t feel right. “It was only after watching Mad Max Fury Road that I tried to turn the camera in this corridor”, says Vurlod. “It was immediately clear for the team after a small session with the game that this could be cool. Our game designer Sandro Dall’Aglio then took this version and iterated on it a bit. After a while we had a solid base on which we started building the game.”

As the one responsible for the art style of the game, Benjamin Vurlod looked to comics for inspiration. “Especially a French/Belgian comic named Blake and Mortimer that featured a similar vessel”, he says. “As the only artist on the project, I wanted to be able to express myself freely  without having too many technical constraints. I chose to have bright and saturated colors, simple shapes and effects that I was able to do by myself. We went through many, many iterations and sometimes I thought I lost control of the art direction. It was a big challenge but looking back it was really exciting. I think I managed to keep the art style consistent, simple and resonating with the gameplay.”

Digital Kingdom is a game studio that mainly creates games for clients. They work on applied game and VR projects for training, awareness and art installations. Every now and then they take on a passion project of their own team. Vurlod: “It was at the beginning of 2020 that we really started the production of the game. We worked on it for one day per week over a period of 3 years. The last 8 months needed a little more work and so we worked some evenings and weekends as well. At the end of the project two other members of the company helped us a lot.”

With the release of the game getting closer, Vurlod and his team hope to find an audience for Swordship. “The game is definitely a niche game. It’s a risky bet because we combine several genres and niches so we hope we will find the players. We didn’t choose simplicity. The game is hard, strange and it takes time to unfold its full potential in the hands of players. I think there’s nothing in between with this game. You either like it or you don’t. But that doesn’t matter. In all honesty, we also like the game to do well financially so that we can free up more time to make the next one.”