HomeMost wantedLost in Play by Happy Juice Games looks like a cartoon "Animation...
Most wanted 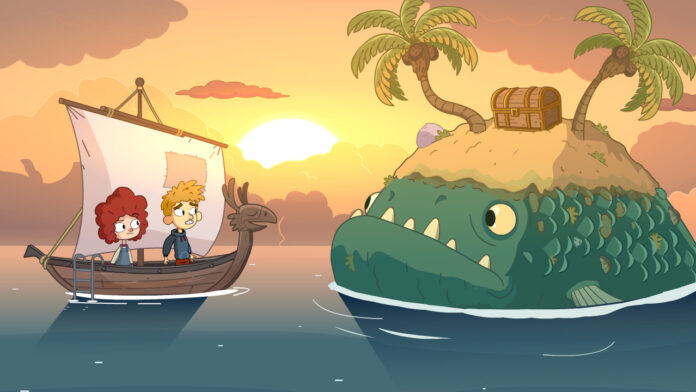 Lost in Play is a cartoony point-and-click adventure from Happy Juice Games. The game stands out from the crowd through its incredible artwork, fluid animation and clever puzzles. The three partners in the company call it ‘a family friendly experience’. “All three of us are parents and we wanted to make a game that we can play together.”

Lost in Play tells the story of a brother and sister, Toto and Gal, who go on a fantastical journey in their dreams. Switching between reality and fantasy the duo has to work together, befriend magical creatures and solve puzzles to find their way back home. “It’s all about children’s imagination”, says designer and animator Orin Rubin. “A world we could all connect with. The kids in the game are based on my own children!”

To bring this magical world to life, Rubin and his partners Alon Simon and Yuval Markovich focused mainly on design and animation. The game feels and looks very much like a cartoon and that’s exactly what they aimed for. Rubin: “We got our inspiration from great animated tv shows such as Gravity Falls, Hilda, and Over The Garden Walls. Not only in terms of style and art but also because of the script and plot.”

“After our studies in Animation, Alon and I worked in the industry for a long time. Design and animation are our expertise and drive”, he continues. “In order to get that cartoon-feel we emphasized the small details. Every small movement is important, hair, eyebrows, facial expressions. Correct timing and softening of movements all create the magic of a vivid and full animation. It was a big challenge to maintain such consistency throughout the whole game, but I feel we succeeded!”

The puzzles, that often hamper the fluidity of gameplay in point-and-click adventures, were deliberately kept fairly simple. “Each stage is built with basic point-and-click mechanics in mind. Puzzles are relatively simple and the emphasis is more on fluid and fun gameplay”, says Rubin. “Each stage has about two mini-games with different mechanics. Those are more challenging than the point-and-click part. We did it this way because we wanted to break the classic structure of quest games and create challenging but not exhausting gameplay.”

The developers at Happy Juice Games based this type of gameplay on their previous game The Office Quest, which they co-developed with 11Sheep. “We knew that if we made a game with a lot of heart there would be a chance that other people would really get a feel for it. We tried to build a kind of a gateway to the genre. A game with a level of difficulty that is not too high and that’s aimed at all age groups. A great family-friendly experience.”

Happy Juice Games is based in Tel Aviv, Israel. According to Rubin, there is a very warm and supportive community of indie game developers in Israel. “While developing Lost in Play we discussed all sorts of things we had to solve with other developers. And of course, we also try to help others as much as we can. The Israeli indie game scene is growing and developing and in recent years. Some great Israeli indie games have been published such as Toodee and Topdee, In Sound Mind, and Grime.”

Ready for the next

So what’s next for Happy Juice? “Following the good numbers of the game and after we managed to build a good team, we are ready to develop another game!”, says Rubin. “We are figuring out what type of game is suitable for us to create. We have some ideas but I can’t go into detail yet.”

Lost in Play is out on Steam, GoG and Nintendo Switch.