HomeMost wantedKilling aliens is clean fun in From Space: "We want to play...
Most wanted

Killing aliens is clean fun in From Space: “We want to play the game with our kids” 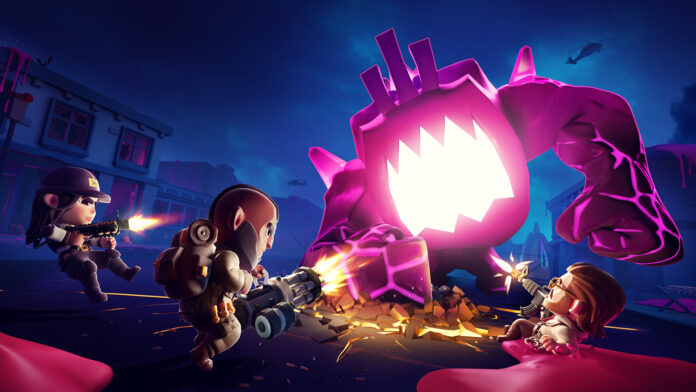 One of the games that did really well at Steam Next Fest is From Space from Dutch developer Triangle Studios. It’s a solo and co-op action-shooter for squads up to four players that lets you deal with an alien infestation. The over-the-top weaponry and stylized graphics make this more like Home than War of the Worlds.

And that is intentional. Next to so many ultra-realistic shooters, From Space looks like a colorful animated movie for all ages. Remco de Rooij, founder and CEO of Triangle Studios: “Many people on the team are young parents themselves. Being able to play games with our friends as well as with our kids is an important driving factor to make sure our games remain accessible to a broad audience. This has become one of our core values, we expect to see it reflected in all our future titles.”

From Space is the spiritual successor of It came from space and ate our brain, a game that originated from a game jam in 2013. That title did really well for Triangle Studios and opened up a new direction for the 16-year old company. “Our goal is to ultimately move into the AA space”, says De Rooij. “Triangle Studios has been around for donkey’s years. We’ve gone through many different phases, and we totally feel like this is the start of a new chapter in our company’s history. It’s the most scary, yet most rewarding project we’ve ever done.”

The development team has been around long enough to recognize the dangers of a lack of focus. So, to prevent the title from falling victim to over scoping and feature creep the attention turned to the core mechanics. Once that was locked in place, all team members got to pitch ideas for gameplay and story. “There’s no single person responsible for all of the design work, but we do have designers who formalize specs and do a ‘sanity check’ before features get put into development. We have again learned from this process, so we’ll likely do it slightly differently for our next title.”

It was the Google Stadia-team that was the first to express interest in the prototype of From Space and signed the title for the platform just before the pandemic hit. At the end of 2020 the game became the primary focus of the studio. “Twenty core team members have been involved with the creation of From Space”, says De Rooij. “However, that number does not include the team of our publishing partner, freelancers, contractors, interns or the musicians who composed the soundtrack. It has become a substantial production, and the number of people involved with the project reflects that.”

Triangle Studios continued to look for a publishing partner to help bring the project to the market. A process that was ‘very intensive’ and took the majority of 2021 to complete. They signed with publisher Curve Games at the end of 2021. “This deal enabled us to build the title to completion before releasing it to the public.”

When the news hit that Google shut down Stadia, plans for the release and promotion of From Space changed overnight. “Never a dull moment in gamedev. We were counting on building an audience on Stadia because we were scheduled to launch in Stadia Pro”, says De Rooij. And so, participating in Next Fest was a last-minute decision. “The team at Curve Games did an excellent job running the event. A brilliant move was having a separate English and Chinese language video stream, which allowed for a massive response from an Asian audience, which in turn drew more attention from the Western audience as well.”

Triangle Studios has plans to support the game beyond the 3 November launch date: “We’re working on new content, features, game modes and we’ll hopefully be able to bring the title to more platforms as well.”