The authority on game horses makes her own horse game 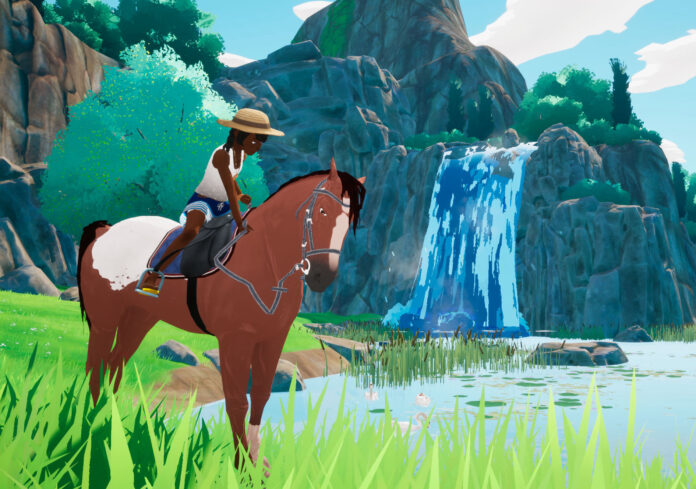 Alice Ruppert, a Swish game producer based in Zurich, decided to share her latest project Horse Tales on Twitter. The tweet read: ‘Hi my name is Alice and I complained about all horse games being bad SO extensively that a 50-people company finally went “fine, make a better one” and put me in charge of their next project.’ Understandably that message went viral.

Although she later explained that the tweet was a ‘mild oversimplification’ of what actually happened, Ruppert’s story is fascinating nonetheless. It’s the classic tale of a girl who was disappointed in all horse games that became the internet authority on horse games and finally went on to make a great horse game.

Growing up Ruppert has always had a fascination for horses. She has been taking weekly horse riding lessons since she was 8 years old. She also liked games and early on she combined her love for both. “I clearly remember my first horse game Mein Pferdehof,” says Ruppert. “I stayed a gamer and an equestrian throughout my teen and young adult life. Of course I always paid special attention to the horses in games like Assassin’s Creed, Shadow of the Colossus, The Witcher and many more.”

There are many games that feature horses and the quality greatly varies according to Ruppert: “I particularly like the first Red Dead Redemption for this, and I greatly appreciate the narrative impact of the horse in Shadow of the Colossus. But some of the worse examples are the recent Assassin’s Creed games. The horse quality just doesn’t hold up to the production value of the rest of the game, both in terms of models and animations and functionality.”

So what’s so hard about horses in video games? “That’s the thing, the basics of horse animation are not actually that complicated to get right. As long as you use reference footage properly and take the subject matter seriously”, says Ruppert. “But studios make a lot of mistakes out of ignorance, rather than scope-constraints. And then you get things like joints bending the wrong way and gait transitions being wrong.”

This was exactly the kind of detailed criticism that she liked to share on Twitter. Many people took to her brutally honest assessments of horses in games and she decided to start a website dedicated to the noble steed. And its portrayal in games. The Mane Quest is a website full of reviews, developer interviews, background stories and technical analysis on the subject, written by Ruppert. “It made me the internet authority on horse games.”

Through her work on The Mane Quest she got in contact with developers working on these type of games. One of them was German studio Aesir Interactive, which already released two horse games (which Ruppert reviewed obviously). After some freelance consulting work, the team asked if Ruppert wanted to join the team as Creative Producer for Horse Tales: Emerald Valley Ranch. “I was of course hype af!” she says. But as the authority on everything virtual horses, Ruppert felt the pressure of the community to produce a good, or even perfect horse game.

“It’s quite literally a dream job for me, but a daunting task at the same time. Especially because I joined the Horse Tales project when it was already well into development, and some aspects couldn’t be changed according to my preferences anymore. That means some stuff that I know the community would have loved just couldn’t be added anymore, like populated pastures, open stables, herd interactions, foals etc. I knew a lot of expectations were riding on this project and I wanted to do it justice, which wasn’t always easy for a variety of factors.”

And so begs the question, is Horse Tales: Emerald Valley Ranch THE definitive horse game? “The game is definitely far from perfect. I could keep working on this for another year if our team resources and budget allowed for it”, is the honest answer from Ruppert. “But I am convinced that the game is the best this market niche has seen in a lifetime. At least it is if you’re looking for things like open world exploration, stable buildup and horse breeding. Again, it’s not perfect. But we’re significantly raising the bar for what this genre can be and I hope the rest of the industry catches up.”