HomeMost wantedColumn • A decent online game store: it's not THAT hard
Most wanted

Column • A decent online game store: it’s not THAT hard 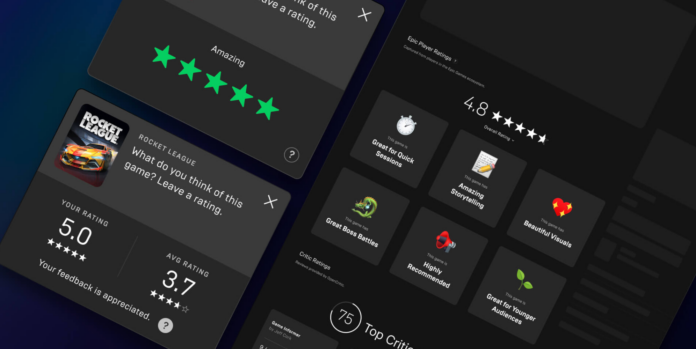 Matthijs Dierckx, composer and game designer, has something he likes to share:

Online stores: please, for the love of God, rid yourselves of your silly non-solutions

Maybe you haven’t noticed, but they’re there. Stars. Stars at the top of some game pages in the Epic Games Store. I feel this is a big deal.

Stars aren’t unique to game stores, obviously, but mostly they’re crap. My favorite stupid-example: Goodreads. Log in, find a book that isn’t published yet, and rate it. It just works. But why? Why would a website let you rate a novel you cannot have read yet? Why would a website work this silly?

“Test readers!”, some idiot shouts from the back. Right. Brandon Sanderson’s (admittedly brilliant) Rhythm of War had over 500 ratings BEFORE release. You’re telling me his novels have over 500 test readers, and ALL of them happen to be on Goodreads? Nonsens. These were silly-ratings, annoying, unnecessary and oh so easy to fix.

Which brings me to my least favorite stupid-example: Steam (we’re on a games industry website, so, let’s turn our focus to the more interactive way of storytelling). Not that Steam is being any less silly than Goodreads… Okay, well, they don’t allow pre-rating, but that’s about it. Steam is doing an even sillier ratings-related job in most other parts.

‘mostly positives’ is the Steam-language for ‘don’t buy unless 80% discounted, at least’

But first, let me get the obligatory disclaimer out of the way: I have been on the receiving end of both very, almost overwhelmingly positives, and ‘mostly positives’, the latter being Steam-language for ‘don’t buy unless 80% discounted, at least’.

That being said, I do find Steam’s ratings to be silly to the extreme, broken beyond repair. When it works, it works DESPITE itself, not because it’s a clever system. And of course it’s not a clever system, it’s a lazy system. Everybody understands the rationale behind customer reviews on a webshop, but come on, think about it for more than two seconds before implementing. Especially when you make it THIS prominent.

I mean, all of the major changes Steam made to its review-system point to a less-than-proactive approach. Of course, OF COURSE!, some developers would abuse Steam keys! How, HOW!, did you not realize that BEFORE it’s a problem. The solution? Remove ALL OF THEM from the one place where they matter: the top of the page.

Thus, the opinion of everyone who bought the game outside of Steam is relegated to the bottom of the page. The opinion of people who really played the game for hours on end now matters less than that of some angry gamer who played for twenty minutes and then refunded.

Would reversing the key-ratings decision solve this problem? Of course not. It would just replace one bad solution with another. Same goes for rate-after-refund. Allowing it is stupid, disallowing it equally so.

Steam’s solutions to review-bombing seem to progress along a similar let’s wing it-appraoch. First, a warning showed up at the bottom of the page, which did nothing for (again) the only place that counts, the top of the page. I’ve recently noticed Steam is just deleting all of the reviews during a suspect period. But what is suspect? Does Steam rely on its algorithms for this? If so, that would increase, not decrease the amount of potential issues.

Steam’s rating system is screwed, no matter what they do.

No matter how Steam tweaks its rating system, they’ll only replace one problem with another. Maybe they succeed in replacing a big problem with a smaller one, which would be progress, but small problems tend to become big ones over at the world’s biggest game store.

They’re screwed, no matter what they do. Unless… unless they think before they implement, for once.

Epic’s new system works something like this: if you have played a certain amount of time, you MAY be invited, AT RANDOM, to leave a rating. It’s as simple as it is genius. Massively downvoting a game is impossible in this system, as is massively upvoting. Players with a negative, positive AND neutral experience are being incentivised to leave a review. Manipulating ratings by handing out a large amount of keys is close to impossible.

And that’s my point: Epic is demonstrating that with a radically different, almost original approach a lot of problems CAN be solved, instead of just being shuffled around. That’s why the Epic stars are such a big deal. They lead the way to a more intelligent store design. A design in which issues are prevented instead of reacted upon. And not just ratings and reviews, I’m talking about forums as well, interactions between players and developers. Steam’s approach is horrendously hands-of, developers are left to fend for themselves. Epic’s approach is better for developers, but maybe less so for players: there is no forum (although, that may even work in everyone’s favor in the end, a game has the exact same issues, whether it’s launched from Steam GOG or Epic, so a centralized place to collect all issues may not be a bad thing).

Let’s hope Steam and all the others learn from this one thing Epic did exceptionally well and take a much smarter approach to seemingly unsolvable issues. I’ll be back next year to see if there has been any progress.