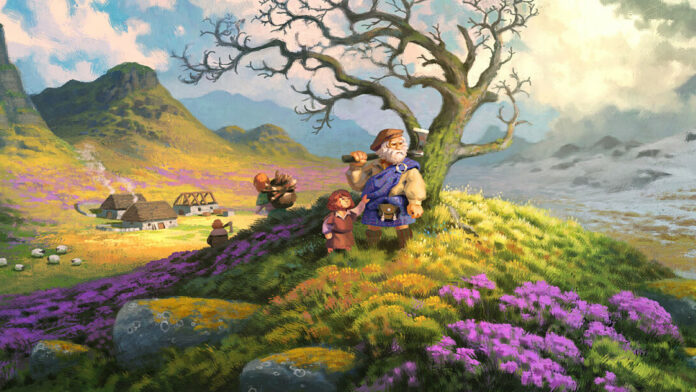 When Andrew Hume started his passion project Clanfolk he never anticipated it would take him 5 years to make. And with the game now out in Early Access on Steam he is still far from being done. After years of working in teams, Clanfolk was his first serious solo project. Development was quite tough. Hume was used to having a partner around while developing games and although the freedom was nice, he admits he missed sharing in the creative process.

It’s fair to call Hume an industry veteran. He started making games 36 years ago on the Commodore 128 and worked as a developer for different studios ever since. “Games are what I meant to do. My entire life has been focused on playing and then making video games”, he says. This was a once in a lifetime experience for Hume. After this he will return to work in a team. However small that team may be.

“I did not really set out to be a solo developer. I have a partner at MinMax named Richard Clifford, and we have been working together now for 18 years. After the release of Space Pirates and Zombies 2, we needed a break from space shooters. But we could not agree on a next project so we decided to make side projects. This led to two games being made under the MinMax umbrella, but as solo projects. They were meant to only be 14 month small games. Golftopia (Richard’s game) was looking great, and I was very much in love with working on Clanfolk, so we extended their development time. We do eventually plan to come back together and work together again. Honestly, I prefer a partner. Solo dev is very lonely.”

“You don’t have to argue about ideas and can just work on what you feel is most important at the time. There are no external support requirements. It is really easy to get your vision into the game and concentrate on the fine details that are important to you personally.”

“You don’t GET to argue about ideas and will just work on what feels most important at the time, which likely is not. Since there are no external support requirements, vast swaths of the game that would normally be keeping up with the rest of development are left to wither. It is too easy to get your vision in the game and ideas are never challenged vs. other ideas/priorities.”

“I use a lot of notepad files. A lot of them. I tend to constantly cut and paste things from the middle to the top as priorities and ideas change. Eventually these files get too big, and I open another one. Only the best ideas make it to the next notepad file. I always plan to go back and review previous files, but ideas come faster than time to review. So there is this constant evolution of ideas bubbling to the top of the current file and then migrating to the next file if found worthy. Mostly though the game evolves as I work on it. There was no grand design plan with Clanfolk. I let the game take shape as I worked on it. There was never a design document of any kind, aside from those living notepad files.”

“People always ask me this, but I love (almost) every day of it. Games are what I am meant to do, and if I was born any other time, I would be doomed. My entire life has been focused on playing and then making video games. I started working on my first game 36 years ago now, on the Commodore 128.”

Games are what I’m meant to do. If I was born any other time, I’d be doomed.

“I think I know why motivation is not a problem for me though. I recently discovered the term for a quirk of mine. It’s something called Aphantasia. That means I cannot see pictures in my head, at all. It is just black in there all the time. I thought everyone worked this way until recently. So, my visual imagination has been augmented by video games all these years. I crave them constantly, I think, because I cannot make these pictures/scenarios myself. When I work on a game it is as close to a visual imagination as I will get. So I guess in the end working on games feeds something my brain may naturally be missing.”

“I would love to work on a team again. Talking to people daily and bouncing ideas around is great. It is good to have someone in the trenches with you on hard days as well. I know that I do not have a monopoly on good ideas and that when ideas are tested they get better. Whenever Richard and I had an argument about a system in our previous games, the result was always a better system. The problem is finding a partner you can trust. I was lucky enough to have found one.”

Clanfolk is a sim game that spans several generations and allows you to build quite a settlement. A lot of work for one person to develop. How did you manage to keep the scope of the project realistic and achievable?

“Well mostly I didn’t. 5 years of development is way too long. Clanfolk was one of those passion projects that developers always warn each other about. I couldn’t stop myself. If this was the last game I would be able to make, I wanted to make exactly the game I wanted to play.”

“Then there is crunch time. It’s been too much and not healthy.”

“Clanfolk still isn’t done, not by a long shot as well. I have always wanted to build a little world with people in it that I cared about, and it is just starting to get close now. I have been quite lucky that other people wanted something similar, and Clanfolk seems to be doing well despite being a bit of an odd duck.”

“There are a few factors. Financial stress builds over time and with investment in the project.  I mostly have to just ignore this as it is a ‘frog boiling in a pot of water’ scenario. It is only just a little worse each day. Never look at the whole money deficit you have created for yourself.

Then there is the crunch time. This has been about 11 months for me now. It is too much and not healthy. I don’t know a way around this as it is driven by financial pressure. And finally, people on the internet can be quite harsh and they will wear you down mentally. There can be a lot of poison out there. For the most part if it won’t matter to you in 1 week, then ignore it.”