HomeMost wantedSolo developer Steve Gabry of Sally Face: "I rely heavily on my...
Most wanted

Solo developer Steve Gabry of Sally Face: “I rely heavily on my intuition” 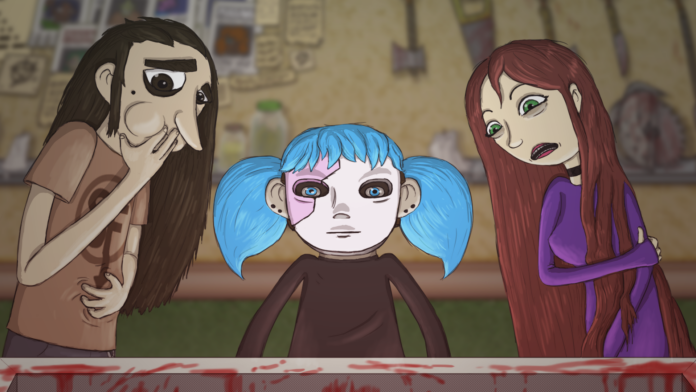 Solo game developer Steve Gabry (Portable Moose) worked on his game Sally Face for over 5 years. In that time he released 5 episodes that tell the story of a boy with a prosthetic face that, together with his friends, investigates a string of mysterious murders.

The episodes are now bundled as one game and with the latest release of the PlayStation- and Xbox versions last month available on all platforms. Gabry opens up about everything from going solo (“I didn’t want to waste any more time”) and creativity (“I have a notebook with too many game ideas”) to his mental health (“depression can strike easily at any moment”).

“It came at a time in my life when I really needed a creative outlet that I could call my own. I was ready for the challenge of handling every aspect of development and excited to build something bigger and more personal. I founded a small indie team several years prior to this and I quickly realized I had too many ideas I wanted to bring to fruition and time was ticking. We only have so long on this planet and I didn’t want to waste any more time not creating the things I wanted to be creating.”

“You have complete creative freedom and control to fully realize your vision. I think having one person create every aspect of the game really gives it a unique quality or feeling that’s maybe more difficult to replicate with large teams. It’s also nice to jump between whatever task you feel like working on that day and having your own schedule in general. Another thing is exploring new territory. For example, I had never really created music before, outside of some high school metal bands. So creating the soundtrack was a lot of fun and something new for me.”

“Two of the biggest pitfalls of working solo are time and limitations. It takes much longer to complete a game on your own, for obvious reasons, and it’s often easy to become too absorbed with the work. To the point of neglecting your personal life. At least for me, in the beginning I was a really bad workaholic – working like 12+ hours a day, 7 days a week. I did that for years before I finally got a burn out and adopted a more healthy work / life balance.”

You’re only one person, so you need to narrow your scope accordingly

“The other pitfall of limitations can be seen as negative or positive, depending on the situation. You’re only one person and only have so many skills to lean on. The need to learn new skills, new programs, tools, etc also feeds back into the time issue. ‘Simple’ tasks could end up taking a long time for you to first learn the skill required to do said task. Some things may just be completely out of reach and you’ll need to narrow your scope accordingly.”

“Generally, if an idea really strikes me or sticks with me long enough then I’ll jot it down in my notes. When I’m ready for a new project, I look over all of the game ideas I have (too many) and see what’s resonating most with me at that time. I think about game concepts a lot so there will likely be a nice seed to start with that’s been planted a few years ago and already starting to sprout. Then I’ll take that little plant and water it with more consideration, brainstorming, research and lots of little notes on various ideas. I also like to do some concepts early on to get a feel for the soul of the game and refine a direction that feels right. I rely heavily on my own intuition when developing games.”

“There are definitely days when it’s harder to make progress on the game. Be that working on a challenging bug or some technical hurdle or just tasks you don’t like doing in general. There are a few things that keep me motivated to push through the challenges and boring parts. For one, I think about how satisfying it is to see the project come to life. Sometimes even little moments like when a character has all their animations and then it starts to feel like a real game.”

Another great motivator is my fans

“If need be, I’ll switch tasks for a while or even work on another project for a little bit, in order to build up the energy for the less desirable tasks ahead. Another great motivator is the fans and how much they’ve connected to my work. I even get a lot of messages about how Sally Face has helped people get through dark moments or helped them be more comfortable with themselves. It really means the world to have that positive impact on people.”

“I work with a team now! I co-founded a small indie team called Wither Studios around 2009 / 2010 and have been working with them in my free time since then. Though, my solo work as Portable Moose has been my main focus since around 2016 and I don’t see that changing anytime soon. I’ve thought about expanding Portable Moose and may not mind that in the future, in order to take some work off my shoulders. For my next projects, I’ll likely contract out some work at least. This way I’m hopefully not spending another 5-7 years on one game.”

Your game Sally Face has a very specific aesthetic and mood. Where did your inspiration come from?

“The initial spark for Sally Face came from a nightmare I had. The visual style is heavily influenced by 90s cartoons I grew up with (stuff like Ren and Stimpy, Rock’s Modern Life and Hey Arnold). The music was inspired by 90s grunge and metal. As for the mood of the game, it comes from a lot of personal places ranging from depression and nightmares to hopes and dreams. I hit some pretty hard times during development and poured a lot of that darkness into Sally Face. Drawing from my own emotions made it easy to maintain a consistent atmosphere within the game.”

I talked to several solo developers that mention that the toll on your mental health can be quite high. How do you deal with that?

“They are 100% right. It’s such a personal thing to create a game on your own. You’re putting so much of yourself into it and then releasing it to the world for judgment. In my case, luckily, the majority liked Sally Face but even the occasional negative comments can ruin your day. Sometimes people online are extra harsh because they aren’t looking you in the face and you’ve gotta develop a thick skin for that kind of thing. I’m quite introverted but even for me sometimes working alone for too long can get to me. And depression can strike easily at any moment, even for things that are technically positive.”

Sometimes I just let myself be miserable for a bit

“The way I handle it really depends on the situation. Sometimes going out with friends or spending time with loved ones can be comforting. Other times I need to be alone and just let myself feel miserable for a bit. Binging a good show once in a while or indulging in a good game is a nice reset for me. The key is recognizing your emotional state and understanding when you need a break from work. I used to just power through and work until I felt better. Sometimes I still do that and it’s helpful but more often I find it’s better to let yourself take a break.”