Solo developer Tomas Sala: “A monster a day keeps the stagnation away” 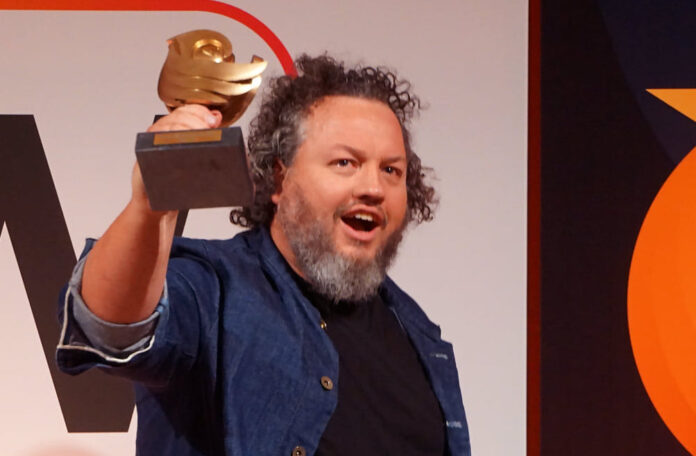 In this new series we talk to solo game developers about what motivates them to go at it alone. In this episode Tomas Sala, developer of The Falconeer.

Before Tomas Sala took the step to become a solo developer, he already had quite the career as co-founder and Creative Director of the Dutch game studio Little Chicken. Although he worked in that capacity for close to 15 years he felt he never really was a good fit as a boss. His mind usually wandered all over the place, racing from one distraction to the next. Not a handy trait when your employees look at you to present a clear vision for an upcoming project.

Sala broke down and burned out. Out of the office and by himself, he started working on his own game projects as a way to keep busy. It turned out to be so much more than just a time waster. Sala found a way to harness all of his negative feelings and turn them into art. His game The Falconeer is therefore a highly personal project that even received a BAFTA game award nomination for Best Debut Game in 2021. He won a Dutch Game Award for Best Art the same year.

“For me this actually harkens back to my Art School days where I was already a bit of a generalist. To be honest, I am the most impatient and chaotic of workers, but that combination has always forced me to explore every avenue to get my ideas to come alive. From art to programming.

Later in life this bit me in the ass, as chaos isn’t a great leadership strategy and as well as a catalyst for pressures stemming from conforming to the systematic practices. I appreciate practices such as SCRUM, but also deeply despise them for myself.

This all led to a fairly severe burnout/breakdown. That was the first major trigger, but the second came a few years later when I was still trying to adjust and integrate myself in the studio I had co-founded decades earlier, namely the birth of my eldest son.

Like so many first time parents, that can be a profound wakeup call to set your house in order as it were. And for me that was a final trigger to realise I am happier working alone and in general being free to pursue my ambitions unconstrained by anything other than family life.”

Being free, in as many ways as possible, is worth a lot to me.

“I can get distracted! That means I can chase whatever distraction or fancy I want.  And I acutely understand how atrocious that sounds for anyone working in a team environment. But for me, being able to work that way and thus having to give up the support and comfort of a team of people is a price I’m willing to pay. Being free, in as many ways as possible, is worth a lot to me.”

“I can get distracted!  Maintaining focus is a core aspect of solo development. This requires a combination of discipline as well as very specific work practices every solo developer needs to discover for themselves. It’s a journey with its own rewards and dangers.”

How does the creative process work?

“I sleep, wake up and get crazy ideas! Little more is required. If you find yourself with a head full of problems or challenges during development, moments of rest and contemplation become a never ending fountain of creativity.

Usually after this I set out to analyze the origin and symbolism of the idea. In context of the narrative and personal nature of solo development this is an important aspect for me. Making sure to sort of chip off the rough edges and hone it within the context of the game/story.

I always allow myself to be distracted by new ideas and will usually immediately start the development process, adapting and fixing the technical aspects of the new idea as I go along. I think a flexible approach where you are willing to compromise constantly is essential. ‘What is important and what is not’ is the most important decision that I’ll make constantly.  And any critical culling happens only after I’m creatively satisfied and can step back and evaluate the working ‘thing’.”

Not being able to provide for your family will put the fear of God in any parent!

“Not being able to provide for your family will put the fear of God in any parent! But for me being distracted and going off on a tangent and bringing this into the game, is in itself the reward. And I get distracted often and thus rewarded often.

One solution to keep things on track in that chaotic flow is that I work through a very limiting and rigid art pipeline so that nearly everything can be visually integrated into the game. If I wake up and want to make a flying eel, usually in a day I can have that operational and visually inline with the rest of the game. Which then gives me a little buzz for having added to the game, even though it didn’t fit any schedule or milestone. And that buzz will carry me through a day after doing ‘head-down’ heavy duty development.

People often wonder how I am able to create the quantity of work for The Falconeer, and that is the trick. I channel my distractions into new content for the game, which is also my motivation to keep going. A new fortress or monster a day keeps the stagnation away.”

“I love music, but am not musically gifted. So, I work with my composer Benedict Nichols on all the musical/audio aspects of the game. Additionally my publisher Wired Productions takes a lot of work from my hands, and they hired Stefan Wijnker to assist with porting the game to all the major platforms. Which, to Stefan’s credit, was essential to getting the game out. I absolutely suck at doing sdk integration. Even just reading through a certification checklist is actually a huge task for me, it requires a focus and patience I do not possess.

In that sense I’m a solo developer up until the core development is finished. Afterwards I do need help because it’s never that clean. And this is fairly essential as it also leaves space to create trailers and promotional work and all the other biz dev stuff you need to handle or be engaged with. Something that cannot be underestimated.”

My ambition isn’t necessarily to be a solo-dev, but rather to be free.

What are your goals and ambitions?

“I just wrapped the Linux (Steamdeck) and VR versions of the Falconeer that need to be released. But basically I’m starting work on the next game in the Falconeer saga. Which won’t be a flight game but rather a builder/management/rts game set in the same universe and continuing the same story. I strongly believe in building ‘IP’ even as a solo developer indie. My goal is to be like a fantasy writer (I already got the garden shed to work in) and deliver an epic sprawl that players can dive into. A world and narrative thread to explore across a portfolio of games in various genres.

I think my goal would be to keep this up as long as possible and strive for a healthier lifestyle with regards to stress and obligations. Ultimately there are many ways in this industry creatives can end up on unhealthy pathways that constrict their options to break free, for me solo development is a (fairly extreme) solution to that pitfall.

Thus my ambition isn’t necessarily to be a solo-dev, but rather to be free. That’s also the theme of the falconeer, coincidentally! For now doing things solo makes this a reasonably low-risk workable strategy but I can also see myself doing collaborations in the future. But the core premise of working alone and going where I want to be creatively has been working well for me these past years.”