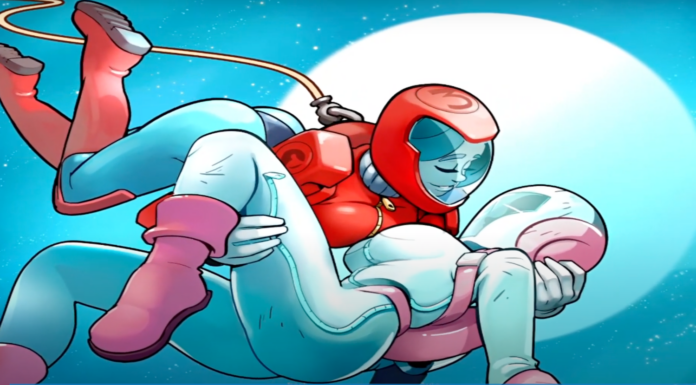 Games with sexually oriented content are harder to sell than, say, games with extremely gory graphics. The AO (Adult Only) rating in America makes it impossible to market such a game on platforms that are also accessible to minors. Nevertheless, it is a growing niche and more and more so-called lewd games are created.

Keijzer saw an opportunity in the market when he noticed many of the games in this segment lacked quality and originality. With his background in comics and game development, he was sure he could add something to the genre. Not only graphically but also in storytelling. “From a young age, I’ve always been a fan of point & click games like Monkey Island and Leisure Suit Larry. These types of games have a strong emphasis on fun characters, beautiful illustrations and a bit of puzzling. I was eager to get to work with those elements myself.”

Since Keijzer works by himself and wanted to keep the project manageable, he turned to Ren’Py, a free engine that allows you to create visual novels with relative ease. “I started with some tests in the engine. Programming turned out to be not much harder than writing an email, so that was ideal for me. I wrote an initial story and converted it to something playable. Then I added my artwork to it. It really was that simple.”

Space Rescue Code Pink is now in early access on Steam, but the game was first introduced on Patreon, where over 1500 backers follow and support the game. In addition to a solid financial base, it also provides an enthusiastic community that closely follows the development of the game. “There are at least ten people who have helped me with things like code changes, translations and a lot of spell checking”, says Keijzer. “Also, there are loads of nice suggestions for gameplay and story pouring in.”

While the game gets regular updates on both platforms, Patrons also get to see the creation process of the game, like art-sketches and previews of new content. Keijzer expects Space Rescue to be in development for another year. After that, he definitely wants to make more games like this. “But then I’d like to do it with a team!”, says Keijzer, smiling.

Keen is a young mechanic who begins his first job as a handyman on a Rescue & Relax space station. He has to help the attractive crew with a variety of tasks and in doing so regularly ends up in heated situations. The story and dialogue are light-hearted. “Players appreciate the positive tone of the game. I’m going to keep it that way as we continue to develop the storylines”, says Robin Keijzer.

Solo developer Steve Gabry of Sally Face: “I rely heavily on my intuition”